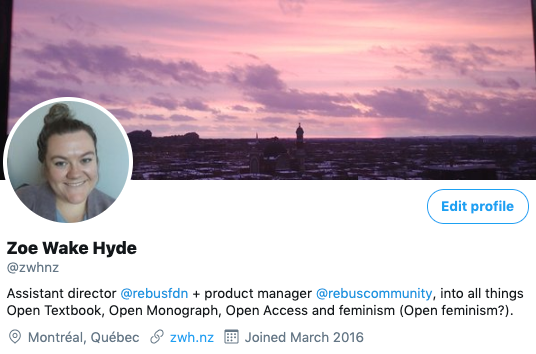 I, somewhat reluctantly, joined Twitter in March of 2016. At the time, I was a student in the Master of Publishing program at Simon Fraser University, and enamoured with all things publishing. My supervisor convinced me to get into this Twitter thing as a way to get more involved with the open movement, and bothered me until I added a profile photo and filled out my bio. While I’ve updated the bio since, this bit hasn’t changed from that first moment:

Funny that a throw away, half-joke about ‘open feminism’ has stayed lodged in my brain in the three+ years since, slowly germinating, fed by more and more frequent encounters with those doing feminist work in the open movement, and adjacent fields like public scholarship. A non-exhaustive list of these inspirational women includes Denisse Albornoz, Hannah McGregor, and the amazing team at Whose Knowledge, not to mention the many, many women leading the way in the open education movement.

Over time, and through the influence of these incredible women, I’ve realised the one thing I got wrong in that first draft of my bio was that the important thing isn’t so much that feminism be open (although it should be). It’s more about making sure that everything ‘open’ is feminist.

The open movement is fundamentally a movement that challenges power structures in service of reshaping the world to provide more equitable access to knowledge. We are challenging systemic inequalities and injustices to improve the lived experiences of millions of people worldwide. And to really achieve that goal, the open movement must be a feminist movement.

The open movement must be a feminist movement. What does that mean? permalink

It means understanding the social, political, and economic inequalities women face worldwide and working to ensure that the movement actively improves them. It means understanding that these inequalities themselves are unequally distributed, and that the intersections of gender with race, class, disability, and sexual orientation impact how each individual experiences the world. It means reflecting on accepted practices and standards and considering how they might be rethought and challenged through a feminist lens. It means thinking about the impact for all people as we build what we hope to be the new foundation for education and knowledge creation for decades, if not centuries to come. And it also means knowing that this work is never-ending – we’re in it for the long haul.

This may sound intimidating, but the good news is that the open movement is just a name for the hands-on work of countless people, all working towards a broader goal in very practical ways. This means we all have some measure of power when it comes to creating systemic change. At every decision point you encounter—whether you have the final say or not—if it is safe to do so, there is an opportunity to influence those decisions in favour of a more feminist way of doing things. This might mean thinking about who you are hiring for a position, who is authoring your textbook, who is given funding etc.

If you want to see this work in action, some of the projects I follow from the folks I mentioned earlier are Whose Knowledge, a global campaign to center the knowledge of marginalized communities (the majority of the world) on the internet, Secret Feminist Agenda, a scholarly podcast on the everday enacted feminism of scholars, acticists and more, and the work of Denisse Albornoz on reimagining open science through a feminist lens.

My professor was right permalink

As it turns out, my professor was right. I’ve learned a huge amount from the wonderful people of Open Twitter (can’t say much for the rest of it, but I’ve found a good community there), as well as many others working to make the open movement more equitable and just and, yes, feminist. I’ve also learned that the work we do is part of a very big picture, and it’s vital we stay connected to it. If we aren’t deliberate about ensuring the open movement is a feminist movement, we risk recreating the same structures that have silenced and excluded so many from participating in education and academia throughout history. I hope it goes without saying that that would be an enormous failure on our part.

With thanks to Leigh Kinch-Pedrosa for editing and inspiration, because creation is always collaborative.